CONCERNING THE DEVELOPMENTS IN THE LEADERSHIP TRANSITION

Diakonia Council of Churches welcomes the resolution of the apparent impasse at the helm of government with the unfolding drama of the events on 14 February 2018. As a body we have remained silent on the growing voice calling for the removal of President Zuma over the past year, because we believed that this was a matter for the ANC to address, and take to Parliament if necessary. That has now happened.

We have been concerned, along with the rest of South Africa, at the apparent lack of definitive leadership as it became clear that there was a contestation over the matter within the ANC. This was a concern as it began to look as though the new leadership of the ANC, and by default the country, was weakened by the deep divisions within the party which have been evident to us all for a long time. We are relieved that this period is over, and that the newly elected leadership of the ANC, under the President, will now be able to turn their attention to project South Africa, and provide stability and direction for the country as a whole.

We have noted, with gratitude, the rapid follow through on a commitment to address the scourge of corruption and the resultant plunder of our nation’s resources. We are hopeful that this continues to be high on the agenda, and that the pace of the action does not falter.

We are realistic enough to not be seduced into believing that all is now well with our country, and that our problems are behind us. The tentacles of corruption run deep, and reach back to the apartheid era, and so will not be resolved by some magic moment. The divisions in the ANC remain, from the top six down, and will continue to place restraint on the pace of change the new President may wish to follow. We wish to remind the party of the biblical adage: “If a house is divided against itself, that house cannot stand” (Mark 3:25), and hope that they can manage these divisions and differences in a creative manner for the good of the country.

We wish President Cyril Ramaphosa well in his new office, and will continue to pray for him and the leadership of our country in the difficult task that lies ahead. At the same time, we will continue to exercise our mandate, which has held since the establishment of this organisation, to be the conscience of the state, and to hold the government to account by speaking the truth, in love, to those in power. That is the role of the church in society, and will continue to be our mission. 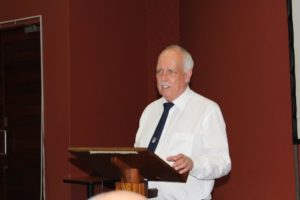