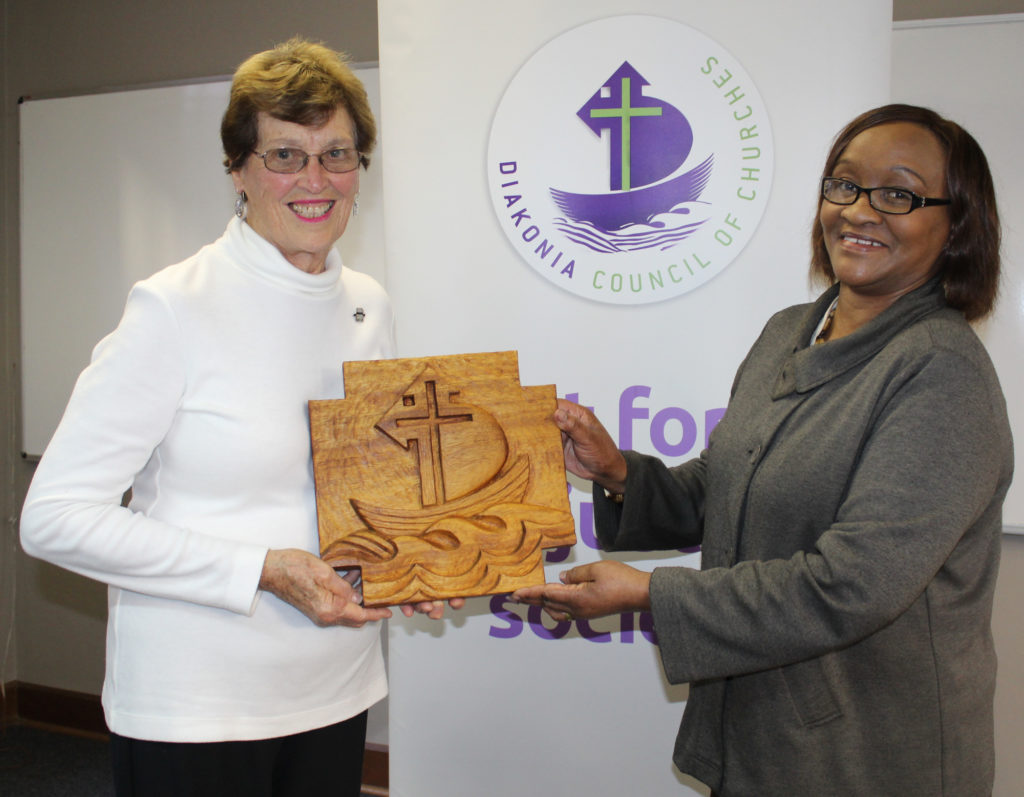 Coral Vinsen a worthy recipient of the 2017 Diakonia Award

The evening began with a dynamic poem by local poet Mzamo Brian before the keynote speaker, Sello Hatang, Chief Executive Officer of the Nelson Mandela Foundation and archivist, inspired guests speaking around the theme: Pilgrimage of Hope and Justice.

Sello has a deep love, commitment and passion for South Africa and feels it’s not just his responsibility, but the responsibility of all South Africans to “help build the country of our dreams.” Speaking at the evening, he said, “When I was asked to speak on the theme, it got me asking questions like: How do we harness the incredible power of the church as a force for good and for the church to treat not just the symptoms of poverty but also the underlying structures that underpin the system? How does the church become a beacon of hope for the people of the country without losing its way? A pilgrimage! A journey!”

“The challenge to build South Africa is to reshape a deeply unequal society into an equal one after centuries of systematic inequality. Our constitution is a marvellous blueprint to achieve this but we are in danger or leaving it there on paper and not making it a reality in people’s lives. When he signed it into law, Madiba said: “Let us give practical recognition to the injustices of the past, by building a future based on equality and social justice.”

He went on to say, “The church has always been a beacon of hope for millions of our countrywomen and men. The question is how do we keep this hope alive that they will indeed be able to access those rights and that we will indeed become a country where justice prevails. For in order to be the country of our dreams we must be a country where we have social justice and economic justice. Without economic justice millions of our compatriots will never know true equality and is that not, after all, what Madiba and his contemporaries struggled for? It is certainly what we are still working for. And time is running out.

“So, on this journey to justice, I would argue that the church must become a space of decolonisation. The church should seek to break out of the comparative traditions of only looking to the west and instead look both internally and across the globe. It is within this broad paradigm of decolonisation, that new forms of thinking can emerge on what social justice looks like and what a universal humanity looks like. And it is from this that we can build the types of social justice activism required in our broken country. It is also from within this paradigm that we can imagine a truly liberatory future, a future that inspires hope in our people. This is the hope that exists not to placate but to liberate."

Coral Vinsen is a previous recipient of the Gandhi Development Trust’s prestigious Satyagraha Award, which honours people who have surmounted religion and ethnicity to promote democracy, peace and justice through non-violence.

Diakonia has been working for a transformed society since 1976, and aims to promote a culture of human rights, and to mobilise churches to be actively involved in social justice issues with the Diakonia Award. It is awarded to an individual who has made a significant contribution to advance and uphold human rights; has actively worked and/or is working for social justice; is a person of moral integrity and has made a difference in other people's lives.

Coral’s care for the environment, passion for the arts is combined with her passion for human rights as a formidable advocate of social justice. While she was out of town, a pre-recorded video clip of her acceptance speech was played and her friend, Thoko Makhanya received the Award on her behalf.

In April 2006, she started the Vumani Urban Renewal Programme, a sub-section of C.A.R.E., and established an organic, fruit, herb and vegetable garden on the premises of the eThembeni Methodist Church in Inanda C Township. Through this programme she has trained gardeners to grow fruit and vegetables, a percentage of which is supplied every week to the HIV and AIDS clients visiting the Support Centre. The Anglican Diocese of Natal also conferred the Order of the Holy Nativity to her for her contribution to the community.

Coral is 86 years old and continues to be active and passionate about social justice. “The high rate of unemployment, particularly of our youth, issues around education, inequality, health, poverty, food security, violence, particularly against women and children, climate change, energy and water issues and the shockingly high incidence of fraud and corruption are deeply worrying concerns for all of us.

“I wish to say that in all the things that I have done, I have always seen myself as part of a collective. My own life and my view of the world have been enriched because of others, whom I have encountered along life’s path. They have challenged all of us to be the people we are and helped to shape the choices that we make,” Coral Vinsen.